This week’s blog features 10 questions (and one bonus!) with paper and design trend watcher Aaron Berman. He serves as the editor of TWO incredible resources in the print community: PaperSpecs — a website that offers design inspiration and information along with an exclusive database of all things paper and VMA Storyboard — a resource dedicated to promoting cross media marketing projects from all kinds of brands.

Since beginning his journalism career in Washington D.C., Berman has been a writer for USA Today, PC Magazine and Yahoo! He has also published several books, most recently “Soap: The Unauthorized Inside Story of the Sitcom that Broke all the Rules.” Berman chatted with SG to discuss all things print, including where he sees it heading from a marketing standpoint and the resources serving brands looking for a new (and evolved) approach to marketing.

You were a writer for USA Today and you did a lot of columns about technology. Was it an odd transition for you to begin writing about print design and marketing or was it something you fell into easily and liked?
Print has always been my first love. I was addicted to books since I was knee high to a grasshopper. That’s always been where my interests lie. I’ve been circling it professionally for years. Also, I’ve been married to a magazine and book designer for the last five years which helps immensely.

That’s like bringing the best of the best together.
Most of the books I’ve done, she’s actually designed. We’ve worked together since day one.

What are your thoughts personally on print design and print marketing? Where do you think that it’s headed?
I think it is becoming a boutique industry, but also every year as more and more things get digitized; it’s becoming more and more important. There’s just no way to deny that you stand out in print. Print still carries with it a cache that — no matter what you do — digital will never meet. [Print] shows that you actually invested some money and thought into what you did. To me, it’s analogous to when you watch a big budget movie. You can always tell when they’re [using computer graphics] as opposed to doing practical effects. You always feel cheated somehow.

Who is the PaperSpecs community? What does it aim to provide?
Every day I’m learning something new about the community. It’s very hard to define really. It’s people who are actually in the field. They’re doing posters and packaging and business cards and all that kind of stuff… And they’re doing it as in-house designers, freelance designers… like anything else there are definitely factions — there are small groups who are just in open rebellion against the digital world. That’s actually the most interesting community to me, in part because I sympathize with them greatly.

“INSTEAD OF SENDING 20 PIECES A YEAR, WHY NOT SEND FIVE AND REALLY PUSH THE BARRIERS?”

Are the pieces featured on PaperSpecs acquired through a submission process?
We have an open submission policy. Anyone can submit their pieces. We also solicit pieces. If we see something online that’s particularly good we’ll go after those people and ask them to submit to the PaperSpecs Gallery. We’re always on the lookout for something that really drives home how powerful print can be.

Do you see trends in the type of submissions that you get? What about in comparison to when you started three years ago?
Things have gotten a lot better. The quality has gone up tremendously. That’s to be expected as costs come down. I think digital is playing a huge role in terms of personalization. Just being able to do a short run that looks really, really good… That technology has improved dramatically. In fact, Xerox came out with a digital press that will do gold and silver ink. That ups the ante considerably. The tools are finally catching up to the designers.

You’ve provided one of our favorite one-liners: “SG regularly creates amazing pieces that are like catnip to designers everywhere.” What prompted you to say this?
I think what it is, is that the designers — and myself as well — are not just dealing with these things professionally. We get them in the mailbox all the time. These staid, tired, boring postcards. Obviously, I’m not going to look at it. And I think when they’re designing it, [the designers] know I’m not going to look at it, so why send it? Instead of sending 20 pieces a year, why not send five and really push the barriers out and create something that somebody will feel bad getting rid of?

The idea of creating five impactful pieces vs. 20… I think in today’s world that can actually go so much further because of digital. If I received the Iggesund card in the mail you know I would be taking pictures of it and putting them on Facebook, Twitter, Instagram and it would organically become this viral thing.
When you’re dealing with clients that are a certain size and they’ve been around for a while, it really is a question of turning around a ship. It takes time to actually get it to turn. I think for the longest time in marketing you were always told you’ve got to keep reinforcing your brand, get it front of [consumers] as many times as you can, but that advice doesn’t really stand up anymore. We’re not in that type of world anymore.

“YOU HAVE ALL THESE OTHER TECHNOLOGIES THAT DON’T HAVE TO BE IN COMPETITION WITH PRINT, BUT ACTUALLY CAN BE USED IN CONJUNCTION WITH IT.”

You’re involved in Storyboard as well. Tell me more about your role there and who that website is geared towards.
I’m the editor of Storyboard and the quarterly print companion to the website. It’s put out by the Visual Media Alliance. The idea is, again, acknowledging that we’re in a different time. It isn’t just print. You have all these other technologies that don’t have to be in competition with print, but actually can be used in conjunction with it. Every week, we set out to find a VMA member that is acknowledging this — finding some way of piercing the barrier between the two — and putting it to good use. 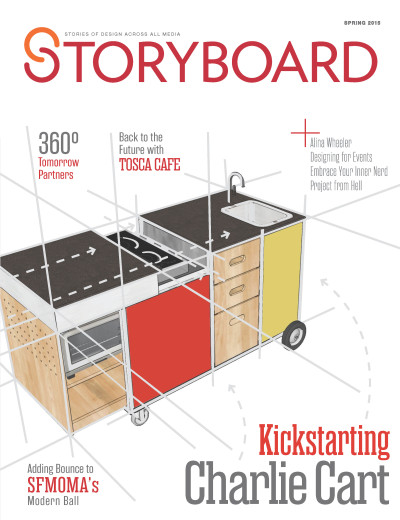 What is your definition of cross media? How do you think it applies to designers and marketers?
More than anything else, it’s the mindset that we all have to design for everything today. It can’t be just for print or web because the walls between those two are becoming thinner and thinner. Most of the case studies that we feature — a lot of them are not fully cross media. [Instead] they have taken one idea and spread it across all media. I think everybody is still in the learning phase. Part of what we want to do is show people success stories incorporating cross media to give them a better idea of what is possible.

You wrote, “Soap: The Unauthorized Inside Story of the Sitcom that Broke all the Rules.” Why did you write about this topic?
It was interesting to me from a historical perspective because when I was growing up (I was maybe 5 or 6 at the time), it was amazingly controversial. All these horrendous things were going on at the same time — Jonestown Massacre, the aftermath of the Vietnam War — yet the thing that got traction was this silly little sitcom. There was a really interesting history there that I wanted to explore.

Berman has also published “The Gilmore Girls Companion,” “The New Horror Handbook” and “30 Years of British Television.” You can find his posts on print marketing and design at www.paperspecs.com and www.vmastoryboard.com.