In a highly digital world, it’s becoming increasingly difficult to get your company’s message heard above the noise. But direct mail can make this seemingly impossible task possible.

Direct mail marketing hinges on the idea of connecting brands with customers in a real and tangible way. To accomplish this effectively, we recommend getting their attention through clever ideas, interactivity and unique attention to detail. In fact, our direct mail designs deliver an average response rate of 8.5 percent.

The next time you’re ideating about your next direct mail marketing campaign, use these examples below to wow the group (and increase your response rates)!

We produced this piece for The Atlanta Falcons to give fans a sneak peek of the new Mercedes-Benz multi-purpose retractable roof stadium under construction in Atlanta, Georgia. This piece was also used to encourage fans to purchase their season tickets and to sign up for a tour of the new stadium. The cover of this piece featured an image of the stadium roof. When pulled down on the side-tab, the roof petals immediately opened up to give recipients a demonstration and preview of the new roof opening. The inside of the mailer featured a web key that drove recipients to a unique URL where they could learn more and experience a virtual tour of the new stadium. The web key also allowed our customer to keep track of who visited the site and market to those who did not accordingly.

In conjunction with Schaefer Advertising, we designed this custom event invitation with our client for the Fort Worth Zoo Ball, an annual fundraising event to support the privately owned, non-profit zoo. Some of the highlights of this high-profile event included an appearance by Reba McEntire, a silent auction and a raffle.

Mettler Toledo is a multinational manufacturer of scales and analytical instruments. They used the Flapper direct mail solution as part of a national lead generation campaign. The Flapper featured imagery of a man with glasses. As you opened up each of the multiple panels, the expression on his face changed slightly which helped build momentum with each panel flip. 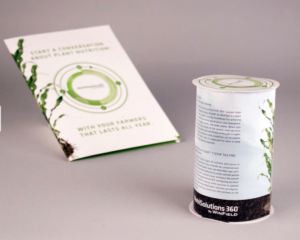 RR Donnelley partnered with us on this high-impact direct mail solution for agricultural brand WinField. WinField was looking for an impactful way to market NutriSolutions, their complete plant nutrition management program. What they chose was this direct mail folder which included a pop-up cylinder on the inside. The cylinder included comprehensive information on the NutriSolutions program. 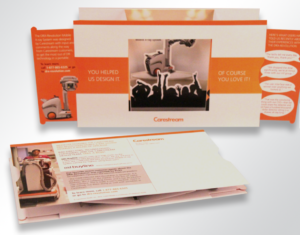 Carestream is no stranger to the power of high-impact print! They came to us to develop a visually creative mailer to highlight their DRX-Revoluion Mobile X-Ray system. They chose our Shadowbox Mailer design. It shipped flat but when you pull on the side panels, the inside transformed into a shadowbox display with the X-Ray machine featured front and center. 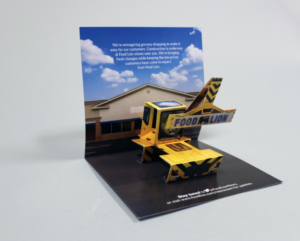 Grocery store chain, Food Lion, mailed this fun pop-up to customers to make them aware of renovations being made to the store and to get them excited about some upcoming changes to the store and product line. The piece is effective to mail because it starts out flat and memorable because of the dimensional component that pops up as soon as you open the piece.