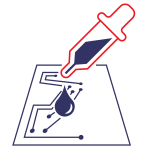 16 Case Studies to Inspire Your Next Direct Mail Campaign

Tasked with implementing your company’s direct mail strategy? No matter the size of your business, opportunity is at your fingertips. New technology and design practices are revolutionizing the marketing industry. Finding that perfect balance of creativity and strategic edge takes time. Research is as crucial as experience, so we did the hard work for you. Below you’ll find a curated list of case studies featuring technology innovations that can transform your marketing efforts, build brand equity and increase market share.

This interactive bar code has found its way onto coffee cups, subway station posters and mailers. With one snap and the right app, the code launches a rich digital experience.

Event managers were looking for a way to create a single unifying experience for their attendees. QR codes provided a seamless solution. Over 50 unique codes were created and added to signage, publications, e-tickets and more. QR codes provided important information, allowed sports fans to share their experiences through social media, brought people to the mobile store and guided them to official apps. In the end, QR-code users scanned event material an average of 1.6 times.1 Although attendees of all ages responded, the largest group of scanners were ages 55 and up. Ultimately, the codes helped increase downloads of the official app to a total of 15 million, while simultaneously enabling the collection of detailed data on location and demographics.2

One company sought a way to integrate QR codes into its newest ad campaign. This omni-channel effort advertised the wide variety of smartphone apps available to its users. QR codes were added to print ads, in-store displays, direct mail, websites and iPad ads. In three months, the campaign saw 150,000 scans, with users ages 18–24 racking up the most scans.3

Put simply, Augmented Reality (AR) takes static images found on print ads and brochures and translates them into dynamic digital experiences. With a special app, users scan photos that allow them to view videos, shop at mobile stores or even try on makeup virtually.

One beauty company was looking for an original way to reach and interact with customers, hoping to drive digital try-ons for their nail polish and prevent product returns as a result. Working with an AR company, they created full-page magazine advertisements with hidden capabilities. At the side of each ad, consumers were instructed to download a special app. By scanning the ad with their smartphones or tablets, readers could try on 40 different nail polish colors by taking a picture of their hand. Users could save the images and post them to social media. Over 10 percent of users did just that. On average, each user spent four minutes on the application. After studying the consumer behavior data collected by the app, the company was able to make informed stock-replenishment decisions and color choices for future advertisements.4

One furniture company added AR capabilities to its yearly catalog, hoping to inspire customers and facilitate a better shopping experience. Using the brand’s app, consumers could superimpose pieces of furniture onto a real-time 360°/180° view of their home. In the end, the company was able to drive even more customers to their app and website.5 Another retail company, used AR in conjunction with outdoor art installations. Cities around the world featured these branded billboards, sculptures, projected media and kiosks. Using a special AR app, consumers could take photos of each piece and pull up extended content about the campaign.6

This technology allows a chip, typically a sticker placed onto a billboard or print ad, to communicate with a compatible smartphone. Through radio waves, the NFC tag drives the user to digital content, mobile stores, sign-up offers and more.

As a big movie premiere approached, one studio wanted to grow viewer interest and engagement with a futuristic campaign. Working with an NFC company, they created NFC-enabled posters that encouraged users to tap the image with their smartphones. Once the posters were tapped, users instantly accessed behind-the-scenes footage and additional content without having to download an app.

The mobile ride-hail company put NFC technology to work as it expanded its reach in northern England, primarily Manchester, Sheffield and Leeds. For four weeks, Uber provided the cities’ pubs with NFC-enabled coasters. The logic: coasters shared the same table space as smartphones — the only device capable of accessing NFC content. To drive conversion, Uber gave an incentive: consumers who tapped the tag were offered £15 off their first ride.7

To promote its N9 smartphone in Dubai, the company added NFC tags to advertising stands and posters. N9 users who tapped the content accessed free vouchers for movie tickets or popcorn. The addition of NFC not only brought value to the user, it also enhanced the brand’s omni-channel strategy. As a result, Nokia won the Best Marketing Campaign using Contactless/NFC Technology Award at the Contactless Intelligence Awards in 2012.8

This type of content merges print and digital by adding video devices to print media in magazines, mailers and more.

Looking to build excitement around its fall TV lineup, one network decided to place a VIP piece within the pages of a popular magazine. Select subscribers in New York and Los Angeles received the enhanced issue. As users opened the card-like insert, a high-resolution video played a special clip from the stars of the show. Although the piece was released in select markets, the innovation of this VIP promotion won free publicity for the network. Multiple online publications picked up the story.9

Gearing up to launch its newest truck, one company sought a fresh way to hit its target demographic. Working with a publishing and VIP company, they created an insert for two magazines that included a 4.3″ LCD screen. Using the publisher’s consumer data, the company found 20,000 readers who fit the profile of the truck’s owner. Video content was then tailored to this all-male demographic. Ultimately, ten thousand subscribers per magazine were sent copies with the VIP insert.11

A multinational company was searching for a marketing idea that could boost brand awareness and grab consumer attention around the world. Combining VIP and mobile-in-print, the company created a mailer that shared the CEO’s vision on a small LCD screen. Customers were then encouraged to call a representative to learn more. The card, embedded with a microphone and speaker, allowed users to make up to 50 calls. After seeing success in the first mailing, the company reordered copies 30 days after launch.12

After hearing multiple complaints about their help line, one multinational insurance company took action. Instead of making customers call in and wait for an agent, the company simplified the experience. Mobile-in-print mailers were sent out, prompting customers to use the keypad embedded on the page to enter their mobile telephone number and license plate information. Once the information was submitted, customers received instant insurance quotes on their mobile devices.

This up-and-coming technology mixes ink with carbon, copper or silver, which then serves as a wire for an electronic device. Although its applications are still in research and development, conductive ink can generate noise, pull up an app and light a bulb.

This beer company created innovative outdoor media to coincide with New Zealand’s Music Month. The ads were designed to look like audio equipment with a number of functioning buttons for users to press. When touched, these “Playable Posters” became 80-watt speakers with 20 touch points and over 12 minutes of new music and audio.1314

These specialized inks make colors disappear or reappear in reaction to heat, cold, light or moisture, making them perfect for a popular direct mail tactic: the secret message. There are four kinds being used today: leuco dyes, photochromics, hydrochromics and flasher.

This company, known for its soups, was in need of a campaign for its new line of frozen products. Knorr wanted to do more than build product awareness. Working with an advertising agency, they set out to change perception of frozen food as a whole. The company sent out a mailer with the line “unlike any F****N dinner you’ve ever tried” printed in leuco dye. Consumers were prompted to put the piece into their freezer. In response to the temperature change, the paper revealed a whole new message: “FROZEN meals can be this delicious.” The campaign was so successful, half of the mailing was postponed so stores could manage the demand. In total, it prompted 17,000 purchases, thanks to an average response rate of 10.2 percent.15

To generate excitement around a new water-enhancing product, one company created a magazine ad with hydrochromic ink. At first look, the all-white page featured a full glass of H2O with text that prompted consumers to cover the page in water. When wet, the print ad revealed a secret message highlighting the thrilling applications of water and made sure to remind readers that the new product could make a boring drink awesome again.16

This category is technically known as shaped mail, because of the creative shapes these mailers take on. These print pieces come in many different physical forms and can be tailored to the needs of a business.

One telecom company wanted to see which type of mailer would drive more customers to their high-speed internet business. To test their theory, they sent out four different types of cards — a pop-up mailer, Customized MarketMail®, a plastic mailer and simple cardstock. In the end, Customized MarketMail had the highest average response rate of 2.1 percent.17

One clothing company sent out two types of mailers — a simple card and a Customized MarketMail piece. After targeting the top 30 percent of their client base, the company found the shaped mailer had a response rate 1.75–3 times higher than the one made of simple cardstock.18

These lightweight mailers transform into three-dimensional designs that instantly stand out from the pack.

Looking to promote its fall TV lineup in an original way, one network found their answer in 3D mail and video-in-print. The result was a VIP screen mounted in a 3D mailer. When consumers received and opened their mailer, the screen began playing branded content.19 In another instance, a television show decided to take a more innovative approach to promoting itself during awards season. Voters were sent mailers that, at first glance, appeared perfectly ordinary. When opened, they transformed into a memorable 3D pop-up.20