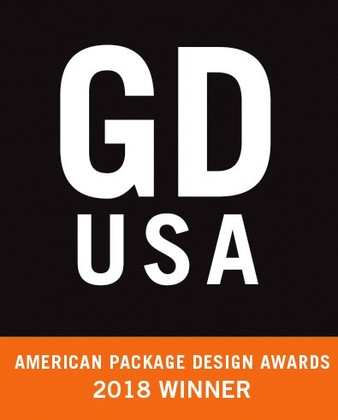 We are proud to announce that we are the winners of two 2018 "American Package Design Awards" sponsored by Graphic Design USA!  This year’s entries reached 2,000 for the third year in a row and a highly selective one-in-five are recognized today with an Awards Certificate. Both designs were winners in the "Luxury Packaging" category.

One of the recipients of this award was the Nationwide CareMatters Pie Box! Nationwide Insurance used this pie box mailer to deliver information about CareMatters, its long-term care product, to agents nationwide. The outside of the box pie box featured a partial mylar window that allowed recipients to get a sneak peek inside the box. In this case, a piece of the pie. Inside the box was a double-layered pie made out of paper that delivered different information as you turned the upper layer of the pie. There was also a brochure and a web key inside the box that drove agents to a unique landing page, specific to their agency, where they could learn more about this product. Read about the award here.

The second recipient of this award was the Lincoln Navigator Video Mailer! We designed this video mailer for Hudson Rouge for their client The Lincoln Motor Company. This brochure was mailed inside an outer corrugated shipper for protection. Once the zip strip was removed, the mailer opened up in a classic Iron Cross fashion, engaging the recipient even before the video played. The inside featured a light panel of the Lincoln star motif which reflects one of Navigator’s new features: a back-lit star in the grille that illuminates at night. The project was done in black n-flute to echo the sleekness and sophistication of the luxury brand. Hudson Rouge chose our 7” high definition video screen and added the customization of a play/pause button to the video brochure. This video mailer was recently awarded a GDUSA 2018 American Package Design Award! Read more about the award here.