When Mazda U.S. released the 2014 Mazda 3 it partnered with Structural Graphics to produce some incredible dimensional mail.

Targeted to 300,000 people in close proximity to Mazda dealerships throughout the country, the marketing campaign produced results that surpassed Mazda’s expectations. Using SG’s “Extendo” direct mail piece, Mazda was able to promote its newly enhanced vehicle and track the number of purchases directly resulting from the direct mail campaign.

It did so well the company followed up with another campaign a few months later.

“Both of these pieces were direct-to-consumer and both were acquisition mailers to drive traffic to sell vehicles. The end result: Mazda sold more cars as a result of direct mail piece than they’ve ever done before,” said Teresa Garner, Director of Business Development at Structural Graphics in Dallas.

What is the Extendo?

The Extendo is a patented direct mail piece created and produced by Structural Graphics. This customized design for Mazda 3 features a cover flap that opens from the bottom, revealing two panels that extend automatically in opposite directions with just one pull to the right.

The Extendo benefits marketers because it has triple the space for additional details and graphics. Its attention grabbing design and functional motion reveal the magic of print by surprising and encouraging people to learn more about a brand.

See videos of the Extendo in action.

Garner worked with the Mazda advertising team to develop the mailer promoting new features of the 2014 Mazda 3. 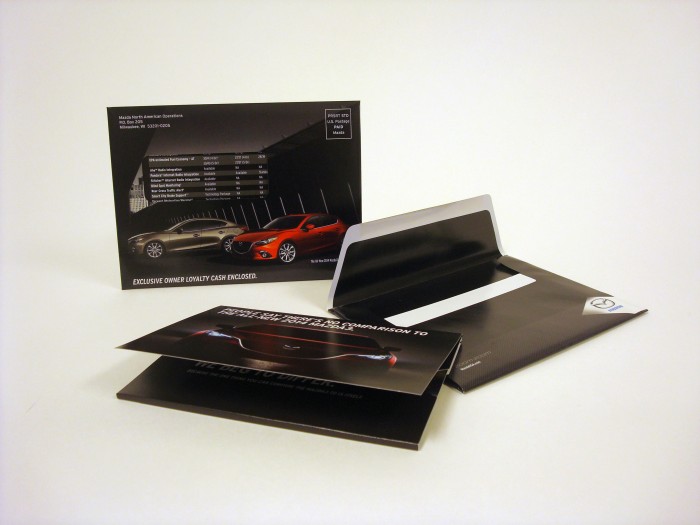 “The goal of the client was to get the word out about the new look and features of an existing vehicle. It was their first time to do an out-of-the-box, unconventional mailer. The production was seamless. Everything went very smoothly. The results and feedback [were] all very positive,” said Garner.

The impact of the Mazda piece was easily measured. The mail piece included a customized offer letter, which prompted recipients to bring the letter to their local Mazda dealership and cash in on special incentives and services.

The collaboration with Mazda followed an open house event at Garage Team Mazda’s office in Calif., where Garner presented SG’s dimensional pieces to the company’s marketing team along with info on SG’s history and experience in direct mail.

The open house not only gave Mazda’s creatives a chance to get to know SG, but also helped introduce younger marketing creatives to the measurable impact of direct mail.

“Creative directors who were familiar with Structural Graphics wanted me to really introduce dimensional and why it’s used. It was very interactive. We all sat around a round table session and just talked. It was all very open, informal,” recalls Garner.

This isn’t the first time Structural Graphics has worked with Mazda. Previously, SG worked with Mazda Canada on an exploding page dimensional piece to promote the Mazda CX-5 vehicle in Canada.

Considering direct mail for your next campaign? Reach out to us today.